Skip to content
Does the “German engine” remain the same?

Does the “German engine” remain the same? 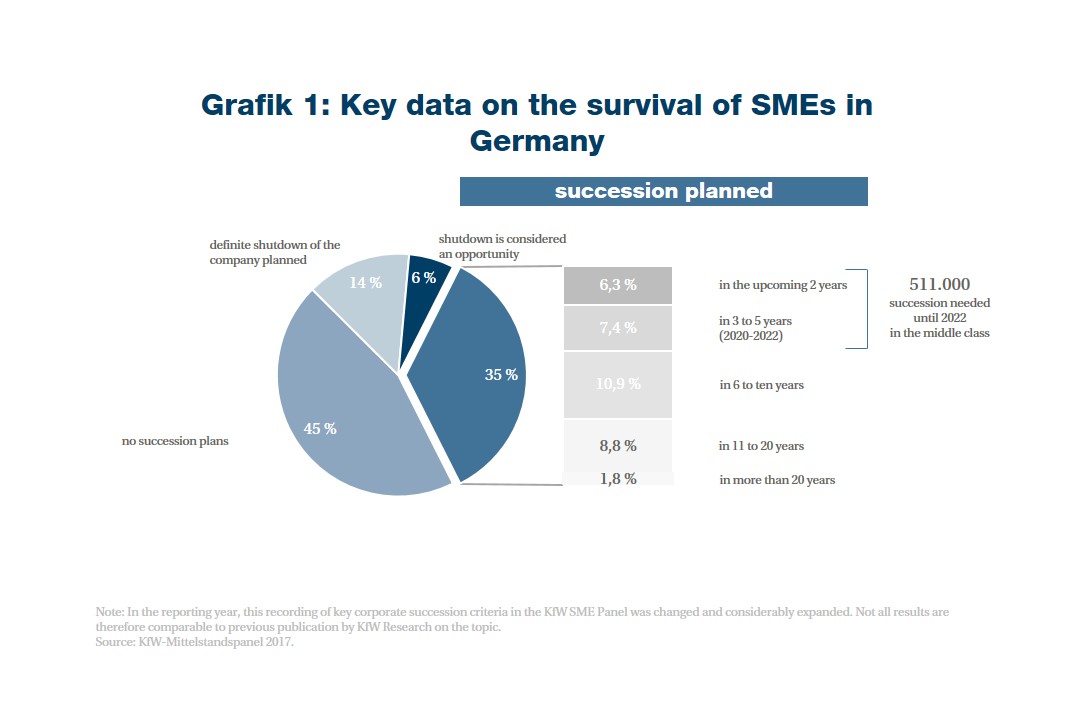 Small and medium-sized businesses are considered the “engine” of the German economy. Medium-sized companies are therefore also crucial for the growth and prosperity of Germany. But will this “engine” continue to run in the future? Or is it more likely that the German economy will collapse because it won’t be fuelled!?

In the post-war years, a middle class developed, being the cause for the good economic evolution in Germany. During this period, many start-ups founded and promoted the booming economy, which in turn had an impact on social development. Not only were employment rates and wages rising, but the birth rate skyrocketed as well. The majority of today’s entrepreneurs come from the baby boomers of the post-war era and helped building the economy in Germany – until today.

This is now up to 70 years back and the topic of “demographic change” becomes not only relevant for banks and insurance, but particulary affects company founders and owners of SME companies. These come increasingly into the retirement age and exceed this now by far. Therefore, almost 100,000 entrepreneurs  currently need to think about their succession until the end of 2019.

Accordingly, KfW speaks of a successor wave in the middle class. By 2022, even up to 500,000 small and medium-sized business owners (SMEs) are to plan corporate succession. Already 1.4 million owners are 55 or older.

In addition to the foundation aof a company, there is hardly a more profound event in the life of a founder than the management of a generation change. Especially in Germany, the successful management of corporate succession is increasingly becoming a central challenge for SMEs. Only in the next two years, a total of 236,000 small and medium-sized business owners plan to withdraw from their businesses. That alone accounts for 6% of all SMEs in Germany by the end of 2019. 42% of them have not yet made succession plans.

This leads to developments that in particular entail economic and social difficulties in the future. Currently, every seventh owner wants to shut down his business. Added to this is an unknown number of unplanned business tasks. On the other hand, the readiness of the following business start-ups is drastically reduced. Their number has been falling for years – from over 1.5 million in 2001 to just 672,000 in 2016.

The German economy is booming: the engine is running and has been giving Germany a sustained upswing for over five years. Gross domestic product grew by 2.2% in 2017. The load factor, the consumer mood of Germany and the demand for goods “Made in Germany” has been consistently high for four years. But what if the German engine is no longer running? If German medium-sized companies shut down their business because they can not find a successor, but on the other hand, the business is going well? It cannot be ruled out that the German economy will collapse and that demand for German workmanship and services will decline. When Germany no longer brings economic performance and loses competitiveness, the prosperity is at stake. Falling sales and exports, unemployment and collapsing sales markets could be the consequences.

Thus, the topic of succession planning becomes an existential topic. Not just in the short term for the entrepreneur and his employees, being threatened by unemployment, but in the long term for the German economy and its population. They harm the possibility of the many closures of the enterprises, since the entrepreneurial middle class, the working basis of our economy, thereby breaks away.